Amway Employee Describes IBO as a Fool for Buying Crap! 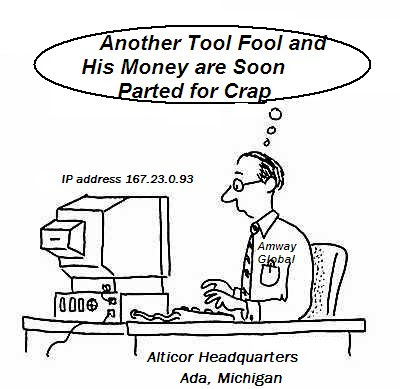 I was lucky enough to have the 'Amway Tooth Fairy' pay a visit to one of my blog posts. Not only did they visit, they left a dime under my pillow--in the way of a comment defending Amway's honor--as if such a thing could really exist?

A short explanation is necessary, so please follow along carefully as I will paint you a picture of Amway deceit and describe how an 'anonymous' individual behind computer IP address 167.23.0.93 left a comment under my Amway/How It Works/Marge's Story Post. If you haven't read about Marge's plight, take a short detour by clicking here. Many other regular readers--who are already familiar with my Marge's Story--will recall that Marge sent me a communication that told a horrific tale of how her finances were ruined by her Amway 'distributor' husband who played a game of deceit, not only on himself, but on Marge as well, running up $16,000 of debt ridden expense in four years of pursuing a Quixtar Land of Will inspired dream. (Not necessarily an uncommon theme amongst dream inspired devotees.)

Now, this is where the Alticor tooth fairy comes to my blog leaving a comment under the alias of 'anonymous' under Marge's Story post. The comment came in early in the day and my Google talk widgett immediately notified me that someone had left a comment on Marge's Story; as soon as I saw the content of the comment I immediately signed into my stat counter page and discovered that the commenter's message was sent from an Alticor computer IP address 167.23.0.93 with this ISP Path Out69s.datetelecomm.net (Alticor Inc) Ada, Michigan. Now that you know that the tooth fairy was without a doubt an Amway employee at the Ada, Michigan Headquarters, read the comment that follows. (Notice that who ever this person was, they have a very noticeable problem with capitalization.)

sad story, but how is this amway's fault? poor decisions + low motivation + credit card + some bad advice sprinkled in does not equal a problem with the company or even the concept.

this could happen to anyone in any business, or hobby for that matter...money can be blown on lots of useless things.

amway doesn't require that owners buy any of that crap, and after $16k if this person is not wise enough to know that they have a problem then it was a matter of time before a "fool and his money are soon separated".

I had already informed readers about this comment on the Amway Soap Box Blog under Amway – Quixtar: Where Criminal Intent to Defraud Becomes “Caveat Emperor” to Alticor Employee! which I also urge you to read.

I want to bring to your attention the word 'crap' that I overlooked the first time I read Alticor's response. I already described how this mysterious person while working at an Alticor computer attempted to pose as any anonymous commenter to deflect blame away from Amway for Marge's horrific experience in a AmQuix household.

This tooth fairy had the nerve to call all the Amway 'stuff' that Marge's husband bought "CRAP": Wow, take a breath; what a revelation! Not something you ever thought you'd see being transmitted from an Alticor company keyboard at pyramid scheme headquarters?

What did this Quixtar "fool" squander his money on? Tools and functions; Overpriced products; and all the mostly disregarded overhead expenses.

Obviously Marge's husband was doing only what he was told to do, first by the upline and secondly by all the mind numbing audio tapes, CDs and books promoted by the motivation business ran by the greedy tool promoters, known as kingpins.

To now add insult to injury, this faceless Alticor person calls Marge's husband a fool for buying all the Amway crap. It seems to me, that if Alticor knows all the stuff that their distributors buy is crap, aren't they truly guilty of intentionally defrauding their own 'distributors'?

Amway, headquarter in Ada, Michigan, head up a pernicious World wide cult which is is overseen by greedy tool promoters who operate their secondary scam on the backs the believers of the Amway Myth. In the light of Marge's victimization, the home office is disavowing any responsibility in the matter, placing the blame for buying all the 'crap' on the victim's husband and in a sort of ironic way passing the blame onto the tool scamming kingpins for enticing their downlines to consume this crap as if it were more important than breathing oxygen, putting food on the table, or making the mortgage payment.

Dear Anonymous Alticor Tooth Fairy, thank you for leaving your dime under my pillow. Amway product and tools are indeed crap; thanks for confirming what I already knew. I can sleep peacefully now, knowing that even Amway thinks their products and tools are crap! I had already proven that to my own satisfaction because those training materials that the kingpin distributors sell for 'top dollar' to their downlines, only sell for pennies on the dollar on eBay--that is if they even get a bid at all. Tex-the used tool lord--can't possibly afford to buy them all even at their penny a pound price; therefore, lack of demand drives their yard sale-like price. EBay tool sellers most likely make more off of their shipping charges than from the product being auctioned. If for chance anyone happens to take a look see at the eBay offerings in the Amway/Quixtar category, you will also discover that Amway/Quixtar products are also being offered up at the same yard sale cut-throat prices as well. Makes me wonder why Amway believers are willing to take such a 'bath' on these supposedly wonderful--supposedly high quality--badly overpriced products? I guess the sellers probably discovered the products and tools really are CRAP exactly as the Amway tooth fairy describes them.

When the dream dies, the appetite for Amway craps dies along with the dream. Word Up! - quixtarisacult 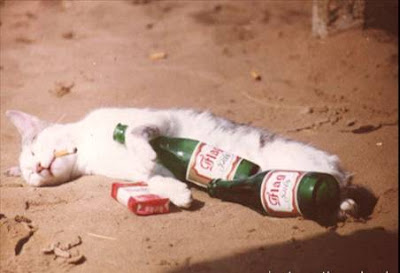 Posted by quixtarisacult at 5:53 PM 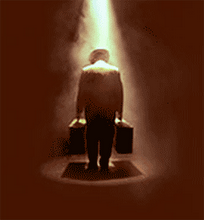 Striving For Success in a Scheme

What About This One? Robert Fitzpatrick Interview with Eric Scheibler

Other Web Pages On Amway And Other Opportunity Scams: